Our skin has its natural way of healing its own wounds by undergoing a few processes such as coagulation, inflammation, fibroplasia and wound remodeling. What people hate most are scar formations after skin trauma. Never have we seen a model, showcasing a keloid on the ramp. For many people, scars greatly affect the way that they dress due to self-perception and self-esteem. Nobody wants to have scars and a keloid is a nightmare.

What is a Keloid?

Scars may remind us of something that happened in the past. Keloids are something that most people want to remove if possible. Keloids are irregularly shaped, thickened, hypertrophic, rubbery, shiny, fibrous lesions. It is either pink, reddish or brown in color. A keloid scar is benign, non-contagious, and sometimes accompanied by severe itchiness and pain. In severe cases, a keloid can affect skin. A keloid formation may sometimes pull skin from the opposite direction of the natural pull according to the movement of the skin. Rurouni Kenshin/Samurai X - a popular Japanese animation series wherein the leading character has an X mark on his face.

Post-operative keloids are unsightly and are feared by those who are about to have surgery. One of the biggest fears and cause of anxiety for pre-operative patients is to have keloids because everyone wants to have a flawless skin. A surgery always posts a risk for disturbed body image or self-perception after the operation. The surgeonâ€™s role is to include in his explanation of surgical operation to perform the possibility of having a post-operative keloid or scar because this may cause depression or untoward feelings for the patient.

The growth arises as a result of a cut, laceration, burn, or sometimes an acne pustule on the chest or upper back. A keloid spreads beyond its original injury with the characteristic, â€œclaw-likeâ€ prolongations. In a closer view, the overlying epidermis of a keloid is smooth, glossy and thinned from pressure. An early growing lesion is red, tender, and has the consistency of a rubber. Later on, the keloid generally becomes brown in color, extremely tender, pruritic, hard and stationary and can pull skin from another direction. There are many variations of keloid sizes and shapes. The most common region is the sterna region, in the middle of the chest, close to the heart. Other areas commonly affected are the neck, ear, extremities and trunk. 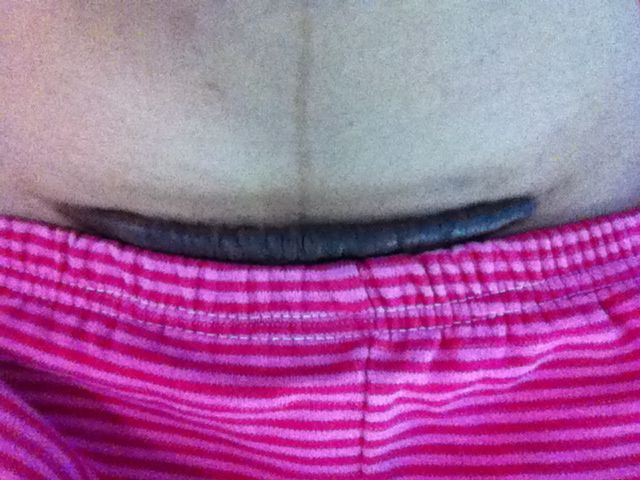 From a Cesarean Section

What makes keloids tough and possess the characteristic rubbery finish is the presence of new growth of myofibroblasts and collagen in the dermis during its formation. Keloids are formed in a whirl-like arrangement of collagen fibers. They grow within the scar tissue. Collagen, which possesses a very important role in wound healing and repair, tends to overgrow in this area, thus producing a lump or hardening that is many times larger than its original scar. It is often told that keloids have tougher characteristics than their original skin and that this formation has a role in protection, because it may be highly sensitive or may remind us once in a while about the injury that happened on a specific part.

For some people, keloids have the capacity to be painful with a needle-pricking-like pain and often times, they can be eachy and annoying without warning. Some people who cannot help but scratch the keloid, tends to have secondary wound and infection on the keloid site, thus making the keloid thicker and harder once it heals. If the keloid becomes infected, it may ulcerate.

Hypertrophic scars are different from keloids although sometimes they may look the same. Hypertrophic scars are cutaneous conditions characterized by excessive scar tissue formation, but not to the same degree as observed with keloids. They resemble a keloid, as being typically raised and pink-red in color. Hypertrophic scars, just like keloids, are thicker than its surrounding tissues, but does not extend beyond the original wound. Hypertrophic scars resolves after six months. They may be associated with the hypersensitivity to touch as with foreign materials sliding on the skin.

Intralesional injection of corticosteroids such as triamcinolone (Kanolene) is the first line treatment for keloids. This have a high rate of response for up to 70% of people who used this treatment had flattened keloids after injection. When this fails, surgical removal through excision is the next treatment in line. This can be done by scalpel excision but should be combined with injections of triamcinolone in the pre-operative, intraoperative, or post-operative phase of the treatment.

For the symptomatic treatment of the pain and itchiness of keloids, Silicon gel sheeting has been widely popular around the globe. It is also used in treating a growing keloid as well as for preventive purposes when a keloid former person has a wound. Other treatments proven to have high successful rates are cryosurgery, radiation therapy or laser surgery to remove the unwanted overgrowth of keloid scars.