Everybody hates a parasite. People who habitually rely on the otherâ€™s expense are called parasites but what can be really uncomfortable is a parasite that lives on a human body. Parasites are organisms that live in or on another organism (host) and benefits by deriving itâ€™s nutrients at the hostâ€™s expense. Lice infestation affects people of all ages. Pediculosis or Phthriasis species are considered ectoparasites, since they live and benefit from the outside of the body of its host. There are three types of lice that infest humans depending on the body part that they affecting. They get all their food and nutrients from the personâ€™s body and leave their digestive juices and excrement into the skin, which causes severe itching and discomfort. A pediculosis infestation is not a sign of uncleanliness. Even a clean person may acquire it.

This type of lice infection occurs in the scalp of the head by the head louse, Phthirus humanus capitis.Â The name Capitis came from the word caput, which means â€œhead.â€ The female louse lays her eggs or nits close to the scalp. These nits become firmly attached to the hair shaft. This is very difficult to remove since the hair has countless and fine strands. The young lice hatches in about ten days and reach maturity in two weeks. These are found most commonly on the back of the head and behind the ears. The eggs or nits are visible to the naked eye because of the glistening oval bodies that are silver in color. The bite of the insect causes intense itchiness, which causes the victim to scratch. Scratching could lead to abrasions and secondary bacterial infections such as impetigo or furunculosis. Impetigo occurs when a staphylococcus bacteria cultivates in the wound causing infection. Furunculosis is a skin disease characterized by the presence of multiple boils.

Treatment of this involves washing the hair with Lindane (Kwell) shampoo. Or pyrethrin compounds with piperonyl butoxide. It is also advisable to cut the hair short to facilitate a faster recovery of the wounds. Long, heavy, and thick hair is more difficult to manage since the heads of the lice are difficult to remove and would even require a fine toothed comb to remove them easily. Fomites are any inanimate object that can transmit infectious agents from one person to another. Combs, brushes, towels, hair accessories and articles of clothing are considered fomites. All articles, clothing,towels and beddings that may have lice or eggs should be washed in hot water or dry-cleaned to prevent re-infestation because it will only bring back the parasites. Upholstered furniture, rugs, and floors should be vacuumed frequently. Combs and brushes should be disinfected using the anti-head lice shampoo. All family members and close contacts should be treated as preventive measure. Â Students in schools should be asked to use the shampoo at a scheduled date. Complications such as severe pruritus, pyoderma and dermatitis are treated with antipruritics, systemic antibiotics and topical corticosteroids. 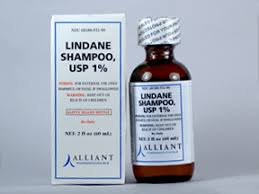 Lindane: a famous louse remedy but toxic to pregnant and nursing mothers.

Pediculosis Corporis is an infestation of the body by the body louse, Phthirus humanus corporis. This is considered a disease of the unwashed people or those who live in close quarters and do not change their clothing. Chiefly involved are the areas of the skin that come in contact with the underclothing such as the neck, trunk, and thighs. The body louse lives primarily in the seams of the underwear and clothing, to which it clings as it pierces the skin with its proboscis. This can be very uncomfortable and itchy. Its bites cause characteristic minute red points. Scratching may further the condition and may lead to eczema. In long-standing cases, the skin may become thick, dry, and scaly with dark pigmented areas. Pediculosis Pubis Â is a common infestation of lice, Phthirus pubis,Â which is generally localized in the genital regions of the body. This is transmitted chiefly by sexual contact. Itching is the most common symptom of the pubic lice particularly at night time. It greatly affects the sleeping pattern without you even knowing it. Excretions of the parasite are characterized by reddish brown dust and can be found in the personâ€™s clothing. This can also affect the parts of the axilla, beard, trunk, thigh, and even on eyelashes. This can be managed with Lindane (Kwell) bath soap. If eyelashes are affected, petrolatum may be thickly applied twice daily for eight days, followed by mechanical removal of the eggs. Fomites are either discarded or treated with antiparasitic detergents. Proper hygiene and washing of clothes are advised. Complications such as pyoderma, dermatitis, pruritus are treated with antipruritics, systemic antibiotics, and topical corticosteroids also. All family members and sexual partners should be treated to stop the transmission of the infecting agent.